September 8th: Give me ahome where the buffalo roam

Today was set aside for bookshops, but given we had done several of them yesterday, we started off the day with just one: Green Apple in the Richmond district. Now for those of you who know my shop, I have to tell you that this bookshop has almost as many cookbooks as I have: one entire wall the length of a deep shop is all cookbooks ( about half new releases). Sadly no Mastering the Art (etc) again, except in new hard cover, but there was so many other gems I barely minded. Green Apple is not cheap however, and this was a trip to tick off some of the books on my customer's wants list - Marcella Hazan, MFK Fisher, some vegan cookbooks etc. I had such a pile I had to leave them at the shop to return when we have a car to pick them up! This was our only shopping trip today ( in case you think that's all I do on my overseas trips).

Instead we jumped on the bus that takes you through the middle of the Golden Gate Park. Contrary to it's name, there is no physical connection between the GG park and the GG bridge, and you can't even see said bridge from said park. It is however a masterpiece of 19th century landscape and social planning. The park is very long (around 5 kms) and quite narrow (around 800 metres at its widest). There is something for everyone here and after a return visit to the tranquil Japanese Tea Gardens, 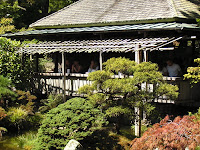 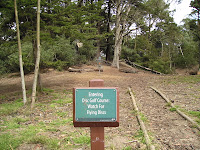 on our (long) walk to the Buffalo Meadows, of which I had heard, but had not yet visited. The Buffalo Meadows were introduced in 1891 at a time when the American Bison was on the verge of extinction. They do have a breeding program here, but I felt a bit sad to see these magnificent creatures penned up in their smallish enclosure.

We continued our walk to the very edge of the park which comes out on the Pacific. Here there are also two dutch windmills, one recently restored and this day among the visitors were two characters who could have stepped out of Armistead Maupin's "Tales of the city": One in boxer shorts and ugg boots under a full-length bright red fake fur jacket, his lady friend in a full length Afghan. More characters!! A circuitous bus trip via 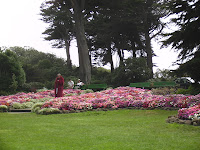 the Palace of the Legion of Honour and we returned once more to our hotel. Phew we walked around 5 or 6kms and my feet are really starting to object - and we haven't even walked he bridge or got to Yosemite!!
at 4:24 PM