Sunday morning saw an early start as we were headed over to the other side of San Francisco Bay for the legendary Alameda Anique Faire (it must be genuinely old if they have the 'e' on the end!!) Held on the first Sunday of the month at the former Alameda airforce base, Jonathan first told us about the fair when he was studying ast Berkeley last year. So when we knew we were going to be here at the beginning of September (oh ok to be honest I scheduled it that way), this was the first of our scheduled outings. We had to catch the ferry becasue SF's Bay BRidge was closed for the Labor Day weekend for seismic retrofitting, and this turned out to be a pleasant way to catch a view of the city and not have to negotiate traffic. 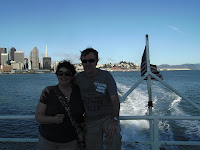 The Faire is Huuuuuge: hundreds of stalls, well-set out with an enormous range of bric-a-brac, genuine antiques and generally old stuff. The goods were generally not cheap - city antique store prices mostly, some of which made me think I need to put my prices up!! Not a lot of books, lots of vintage clothing, a smattering of kitchenalia, lots of ephemera ( David bought some great old maps, bottle & can openers and an old miniature pen-knife). After starting out at 9,30 strolling up one side of an aisle and down the other, we looked up at one stage realised we'd covered 5 aisles in 2 hours and had another 10 or so to go and rapidly changed our modus operandi: walk down the middle of the aisle and only check out the stalls that looked interesting. Straight past the furniture stores, jewellery stores and clothing stalls ( my girls would have gone mad over the old clothes - some really stunning stuff). As it was we finished at about 2pm. The day was really sunny and mild, but we bth amanged to get VERY sunburnt - not a good look. 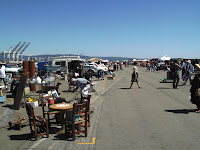 If I was shipping a container back to Australia I could really have gone wild, but I wasn;t, so here is a photo of my carefully chosen buys. 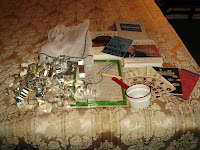 After a ferry trip back to SF and we had a lovely light lunch at a taqueria in the ferry building, of a pork soft taco for me and vege one for David and a couple of strawberry aqua fresca. I love Meixcan food, but only as it is made in the US (and in Mexico I'm sure, not that I've tried it there). So far nothing I've tried in Australia comes close to recreating the flavours. I think perhaps it' the use of Masa (or cornmeal) dough used to make the tortillas etc, and the generous use of chili and coriander. whatever it is I've resolved to try taquerias wherever we go on this trip. We walked to the Fort Mason branch of Book Bay - Sf's Friends of the SF Library bookshop which I've mentioned here before.
Before heading home we paid a visit to Whole Foods - the organic and achingly hip supermarket chain. Great produce here, (very pricey) but more importantly they have the healthy equivalent of the old Sizzler self-serve buffett, where you pay$7.99 a pound for all sorts of ready-made meals stews, chili, curries, chicken, salads which you can mix and match for a convenient, fresh meal at home.
David was in bed by 8.30 after our monster day, I stayed up plotting out the city's bookshops on my transit map. Tomorrow it's Labor Day sales and some bookshops.
at 1:14 PM

Sounds like you've had some great foodie experiences already- I was thinking you guys would love the tiny cafe looking out on Washington Square Park that we went to when we were there- on the right when you reach the park if you're coming from el centro. also Mama's on the opposite side- it's famous for breakfasts and sooo good....happy SFing, love Hayley

Couldn't quite make out all your lovely loot even after enbigging the photo. Love the little red and white saucepan. What shapes are the cookie cutters? I haven't done it yet but I am going to use cookie cutters for my next batch of oatcakes so I may have to top up with some new ones when you get back. Cheers. Sascha