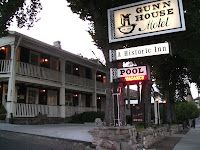 Gunn House Hotel Motel in downtown Sonora
We woke this morning to the sound of rain, very unusual. As we travelled out of Sonora towards the eponymous Pass, the fog was thick and low, not very promising for viewing the scenery we had expected. Fortunately it began to lift the higher we got and by 8000ft we had a lovely day, blue skies with a little bit of light cloud cover. The drive was spectacular, the road a little scary at times as it hugged the curves, occasionally disappearing from sight without warning. A steeeep climb brought us to the pass at 9600ft, and promptly took a 25% downward swoop – as it happens going down can be even scarier than going up!! 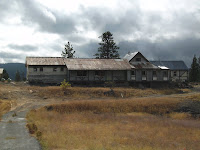 An abandoned ski lodge on the Sonora pass Rd
A couple of surprising sights along the way included this abandoned ski lodge. However the most amazing sight of the day came as we dipped down towards Hwy 395. We passed a small sign saying: “Careful. Marines training in this area”. Well, we thought we might see a couple of guys in fatigues and buzz cuts running next to the road, but no. As we rounded a bend we could see a huge complex of buildings – mmm – I didn't know there was a town on this road! Next as we cam down into a valley the road suddenly went from bumpy and patched to a smooth, newly laid ribbon of bitumen. Around yet another bend we drove past an enormous parking lot of camouflaged Hummvees and trucks, loooots of young men in camouflage and buzzcuts and a sign warning “Careful low-flying helicopters may cause flying debris”. As it happened we had stumbled upon the US Marines Mountain Training Centre – very new and I suspect training marines for the tough mountainous conditions of Afghanistan. I hope you'll understand why I didn't take any photos, and I suspect if you tried to find it on Google Maps streetview, it might be blurred out.
Anyway, after that little bit of excitement the next was our planned sidetrip to the historic Ghost Town of Bodie. I had read about it many times, and knew that it had been the location for many spaghetti Westerns, and the main reason we had come over the Sonora Pass to take the back way to Yosemite was for this. It was well worth the time and miles – lots of people around, but an amazingly maintained historical site. The NPS likes to say that it is in a state of 'arrested decay', that is, they do the bare minimumto ensure the buildings survive, but this is no Sovereign Hill. 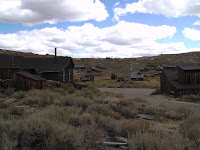 The ghost town of Bodie
We followed a back road ( the advantage of hiring an SUV) along the shores of Mono Lake, an awesome sight with it's enormous salt pillars, although its beauty is tempered by the fact that the lake is dying because of its feeder rivers being sucked dry by the water needs of Los Angeles. 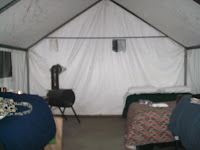 Another spectacular drive up the Tioga Pass Rd (again to 9000+ feet) brought us to our destination for the next two nights – the rustic (I do not use the word lightly) Tuolumne Meadows Lodge in the High Sierra region of Yosemite National Park. Accommodation is in 'tented cabins' – essentially canvas tents with concrete floors. No electricity, a solid fuel heater and candles the only luxuries. Really dodgy showers and toilets had me swearing I wouldn't shower for the next 2 days, but the setting was spectacular – next to the Tuolumne River, with huge peaks towering sround us. After a reconaissance drive and walk along the meadows itself, we had a Corona by the river as the sun set over the peaks. Beautiful.

OK and the food stories of the day? Nothing much of significance: A typical American hotel breakast which was more like an afternoon tea, saved by freshly made waffles. Lunch was in the quaint highway town of Lee Vining at the local Frostie Diner - we stopped there because the local cops were having lunch - always a good sign. A bowl of Chilli for me and fish and chips for David suspiciously long way from the sea! The next few days we had decided to self-cater (although with no cooking facilities that wa going to mean a lot of sandwiches). The Yosemite concessioners have a monopoly on all food and accommadation in the park, meaning everything is over-priced and sometimes of dubious quality. $18 for a chicken caesar salad at the lodge dining room was enough to drive us to the 'grill' at the general store with hamburgers which were out about 2 minutes after ordering - never a good sign! 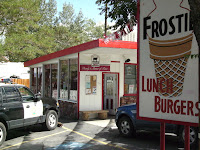