You know that sensation of dislocation you get when you are away from home and wake up in a strange bed in the middle of the night? For a few seconds your brain says: Where am I? What am I doing here? Well two days after returning from our trip I'm feeling a bit like that most of the time during waking hours!! My family now knows in advance that, while I love them and miss them when I am away, I am always in a bit of a funk when I get back.

Last time I blogged was after our excellent meal at the Yosemite Bug back on September 17th. As it happens, internet access was patchy at best for the next 9 days as we moved around California. Now I need to catch up, but rather than bore you with a blow-by-blow account of that time ( a bit like a very extended slide show) I thought I'd just share some general impressions ove the next few days. In summary: After Yosemite we headed off to Kings Canyon & Sequoia National Parks, which were unfortunately left in the shade by the spectacular sights of the previous week. We made a decision to cut our stay there short and instead worked our way back across the width of the state to spend 3 days in Pacific Grove, next door to Monterey and at the start of the famous Big Sur drive. Unfortunately the Sur was fogged in for all three days we were there, but we still had a fantastic time exploring the region in more detail than we had been able to on previous visits. We then headed down to Anaheim for a Yankees baseball game against the Anaheim Angels, which turned out to be suprisingly enjoyable. A marathon night drive up the centre of the state to San Francisco via Bakersfield gave us 3 lovely days in a beautiful Inn in the Hayes District of the city to end our trip.

General Impression Number One: I've never made it through Michael Pollan's The Omnivore's Dilemma, but it is definitely on my must-complete list after driving for hours and hours through the Californian countryside seeing literally hundreds of miles of monoculture. Hundreds of miles of Pistachio trees, growing only by dint of the huge open canals siphoning water from rivers to turn deserts into orchards. Ditto the hundreds of miles of citrus growing in sand that can only possibly support them by being constantly supplemented by artificial fertilisers. Agriculture is apparently still California's top export, and it just shouldn't be - these thousands of square miles of crops are all growing in a natural desert. Most are grown by large corporations, using cheap, migrant labour; we would pass huge fields where produce was being processed on the spot - with dozens of labourers following massive harvesters, cleaning and packing as they went. Most wore makeshift face masks of t-shirts or towels to protect themselves from the dust being whipped up as they worked. Most of these workers are illegals so have very few benefits or rights and are working for tiny wages. We would sometimes stop in relatively prosperous towns where there would be a collection of trailers or small units clustered on the outskirts where these workers would live - it reminded me sadly of the situation in South Africa where I grew up: 'townships' were established which would segregate workers from the 'locals' keeping them out of sight - but still handy to work on the farms and towns.
On the way back to San Francisco from Anaheim, driving along the 5, we were also confronted by the reason everyone should become vegetarian (David would have felt smug if he hadn't been so sickened). Vast feedlots covering many hectares jammed full of cattle - nothing but dirt and their own faeces below their feet, no plants, no trees, long troughs full of grain and water in front of them. The smell weas unbelievable and stayed with us for miles after we had passed.
Recent food posioning scares in California agriculture have suggested that there is a price to be paid for this massive over-farming, but the situation is unlikely to change as long as there is a market for the produce. I will personally never buy a Californian pistachio or citrus fruit again, I would find it hard to give up meat, but like so many others I think organic and grass-fed is probably the way to go.

One more thing that struck us as we drove through these mega-orchards- there was not a bird to be seen or heard anywhere. 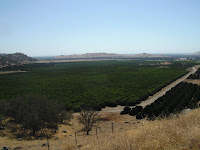 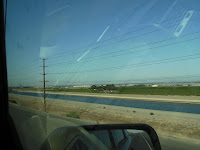