Starting on Monday, our trip turned to some serious hiking and exporing the beautiful Yosemite National Park. Our tented cabins at Tuolumne Meadows Lodge were the perfect base for this. ( well perfect in location. Those who are dearest to me know I don't normally 'do' camping in any form, but accommodation options in the High Sierra area of Yosemite are limited). It turned out to be a beautiful spot though. The stars at night were amazing - so many it seemed as though every spare cm of space up there was crammed with them. We saw several satellites crossing the sky. Awesome.
Our first morning we tackled the spectacular Lembert Dome, literally across the road from the lodge. We climbed 800 feet in the 2 miles up to this amazing formation before scrambling up the granite rock face to the top. The previous evening we had seen hikers making their way across the dome, and I wasn't sure was up to it but here is the photo to prove otherwise ( I don't normally do photos either, but was so proud of myself, I made an exception). We had set off very early so were on our own up there, blown away by the views from the Dome across to the John Muir wilderness and miles and miles of peaks and forests. 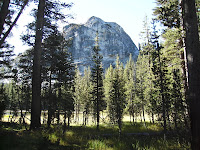 Lembert Dome from the start of the hike 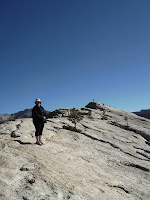 And at the top an hour later.

We took a burger lunch to the shores of the magnificent Tenaya Lake , and had another of those moments in this trip when the location even seemed to make the food taste better. 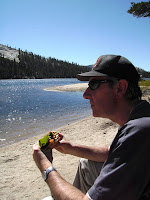 The afternoon was a 4 mile round trip to May Lake, also a very steep climb on a very warm afternoon (the weather has been absolutely flawless). There are several camps in the High Sierra which are established as a base for walk-in hikers. They use packhorses to transport in supplies to the camps which are a good day's walk apart. May Lake camp has an idyllic setting around the shores of this small lake, with tented cabins scattered throughout the lodge-pole pines. After the very hot climb up, it was fabulous to spend some time just sitting with my feet in the icy water, in complete silence of the lake. Magical. 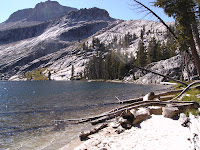 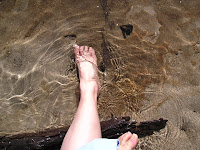 Day 3 in the High Sierra, David had the chance to do some serious hiking without me, doing a 7 hour round trip to Glenaulin, another of the High Sierra camps. I made my way back down to Lee Vining to fill the car with petrol, do some laundry and catch up on internet after two days without. I also took the opportunity to just drive and found myself on the June Lake loop, a fishing, boating and (in winter) serious wintersports playground. One of the lakes on the drive, Silver Lake looked like it had stepped out of a picture postcard, and because David had the camera, that's what I had to satisfy myself with to remind me of this serendipitous discovery. Have a look at this pic from tripadvisor http://media-cdn.tripadvisor.com/media/photo-s/01/2b/f7/4a/silver-lake-jpg.jpg and you'll see what I mean.
After picking David up from his marathon walk, we made our way straight down the Tioga Pass Road to the Yosemite Valley for our next two days exploring the Park. Arriving at Camp Curry , which was established not long after the park was, I discovered there could be something worse than the very rustic tented cabins of Tuolumne Meadows Lodge, the tented cabins at Curry. While slightly more modern, our tent was tiny and one of around 700 such tent cabins squashed together in the precinct. The Camp was full, so there were people everywhere, cars everywhere, RVs everywhere, kids everywhere. I apologise if the comparison is spurious, but the image that kept coming to mind was that of a refugee camp.We had gone from the serenity of the High Sierras to my idea of hell in the Valley. The only high spot in a very miserable evening was while we sat eating tiny $8 pizzas, a family of racoons made their way out from their home under the dining hall and started sniffing around under the tables for scraps.
Just when I thought things couldn't get any worse (the internet was down in the camp as well!), when we turned in for the evening, we discovered that because our tent was positioned out the back of the dining hall we were to be inflicted with the sound of its refrigeration units all night. A very bad end to day 3.
at 11:26 AM

wow it's so beautiful there- and you've got to see so much more than previous trips. The camp site sounds terrible cause of all the people though I don't think you'd last long in the accoms here in Latin America mum!