The Thomas Keller franchise: Bouchon and the Napa Valley

Picked up a rental car this morning for my drive to the Napa Valley. First I dropped Jonathan off at his frat house ( still no tour, folks) and he brought out a box of goodies for me (mostly cookbooks he has accumulated for me and books he wants sent back to Australia). Using the trusty GPS I had no problems finding my way around. I stopped off in Napa and found some gorgeous cookie cutters in an Antique Market. The weather was beautiful and driving through the valley's vineyards reminds me a lot of the Yarra Valley - miles of vineyards and lovely buildings: 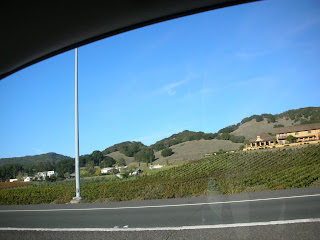 After a brief stop at the Napa Outlet Mall I made my way to Yountville, home of French Laundry, Bouchon and Bouchon Bakery, all part of the Thomas Keller franchise (with others in Las Vegas and New York). Yountville was probably a pretty, character-filled village once upon a time, but lots of new development and sterile refurbishments have made the main street resemble something between the town in The Truman Show and Stepford. There are some exceptions to this in the back streets: 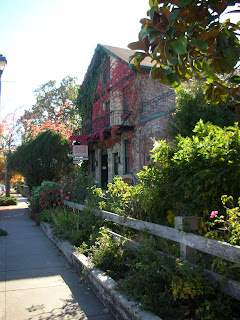 French Laundry is another exception, the original building (once a laundry), has been sensitively renovated, and is unassumingly positioned a couple of blocks from the main part of town: 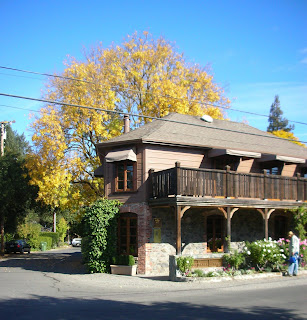 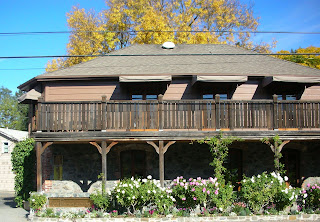 It is clear in this building, as well as Bouchon where I had lunch, that Keller puts an emormous amount of thought into the aesthetics of his restaurants, and the attention to detail is impressive. Against the autumn colours of the street trees, Bouchon looked very welcoming. People were enjoying the sun and a galss of wine at tables on the sidewalk, and in the courtyard attached to the Bouchon Bakery next door. 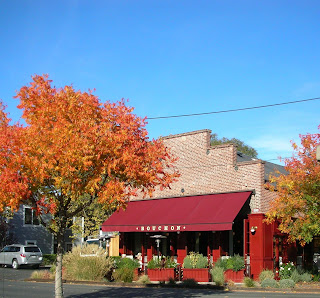 Inside the bistro is cool and classic - high pressed tin ceilings, wood and etched glass, the huge mirror behind a traditional bar on one side of the room bringing the outside light in. Tables are set very traditionally, linen covered with butcher's paper and set with heavy silverware. Lots of waiters buzzing around. I ordered a goats cheese salad (like the one I had at Chez Panisse this alos had a beautiful dressing - I have made a note to start epxerimenting with vinaigrettes, they add so much to a very fresh salad.)
This was followed by crispy pan-fried striped sea bass, served with green beans in a light tomato sauce. The bass was beautifully cooked - a thick fillet still a tiny bit pink on the inside, the skin perfectly crisped. The accompanying beans were not a great foil for the fish - over-salty and chewy. I really enjoyed the fish, but around me most people were tucking into what looked like fabulous steaks with pomme frites - and I am a sucker for a good steak.
This was followed by a sublime lemon tart: very tart (!) in a pine nut crust with a touch of meringue piped on top followed by a so-so latte (can't wait to have a good coffee at the Deli when I return) 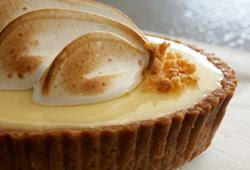 I also had a glass of Gemella, a beautful wine from a very small local winemaker called Scholium Project - very unusual, clean, crisp and really suited to the bass. Final bill around $100 including tax and tip was the same as lunch for Jono and I at Chez Panisse. Of the two meals I think Chez Panisse was more my style, I felt much more 'at home' there, which is probably a result of the Chez Panisse ethos. I've been trying to find a way to justify a quick trip over to Berkeley for another visit before I leave, but don't think it's going to happen.
I'm leaving San Francisco on Thursday morning (Friday your time) for a trip down to LA to catch my plane on Saturday night. There's another couple of opportunities for some good food on the way down, but the next two days are going to be dedicated to shopping, so I might not get a chance to bog before I get down there.
at 2:45 PM

this post is making me hungry! xo Love Hayley