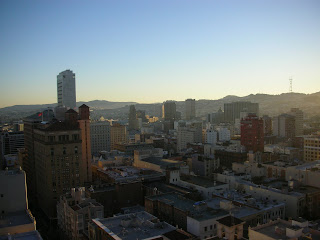 So here I am in San Francisco,living the dream - a studio apartment on Nob Hill, with gorgeous views over the city, last night I slept with the window open and heard almost all the typical sounds of San Francisco - traffic, cable car bells, a fog horn,(plus fire engines, drunks etc etc).

The flight over from Sydney was longer than expected given we spent almost an hour sitting on the runway because ( to quote the pilot) they couldn't find a printer in Sydney airport to print out the passenger manifest. I hate flying, but this flight was made tolerable because it wasn't 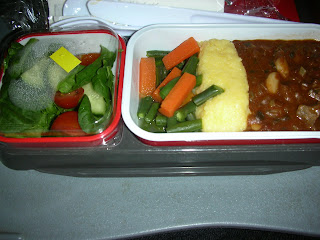 very full and there was space to spread out. As expected the plane food was dire: Dinner a beef 'ragout' with polenta and a fresh salad which was edible. Breakfast 2 ghastly lumps - one of 'egg' and one of 'potato'. No photo, I thought I'd spare you.

Customs was a breeze even with 2 pkts of Vitabrits in my case for Jono. We caught the BART train from the airport to Powell St and Jono dragged my heavy bag up very steep Powell St to the hotel (not an easy task). After I had a quick shower and change of clothes we went out into the beautiful balmy SFO day and Jon showed me some of the sights.
Lunch was diner style, because "When in Rome" and all that. BLT for Jonathan and turkey sandwich for me. The diner is such a quintessentially American experience - the open grill, the bar-style counter 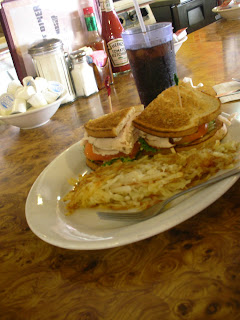 and booths, the huge sandwiches and requisite potato side dish (and 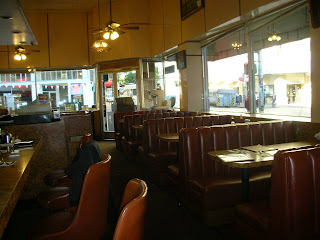 pickle). If you're eating in this country you have to try them at least once. While some are fantastic (I'll be visiting the Blue Windmill in Sausalito which is a good example) others like this one are ordinary - the standard of cleanliness and freshness of food leaves a lot to be desired and they try to make up in quantity for 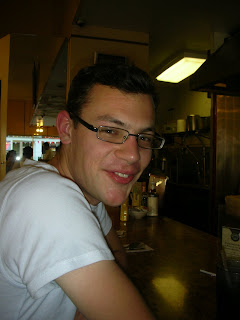 what lacks in quality. There are many chains now springing up which play on the 50s 'Happy Days' version of a diner - Lori's has three diners within a half-mile block of my hotel and Mel's is everywhere - doing brisk tourist trade.

DAY 2:
This morning I walked down to the original Farmers' Market at San Francisco's ferry terminal. Started in 1992, it's a mecca for foodies (although others have sprung up around the Bay area which apparently are better). We are justifiably proud of the variety and quality of our food in Australia, but the Farmers' Market here runs rings around anything we have. Here are my highlights: 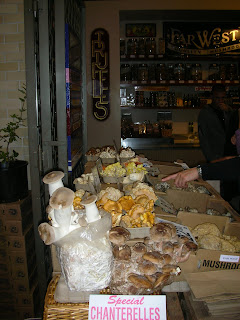 Outside one stall with about 6 metres of table space selling salmon in every form.

And for me the crowning moment - the thing which confirms San Francisco as foodie headquarters. A little girl, not much more than 18 months old slurping oysters freshly shucked by her dad off the shell! 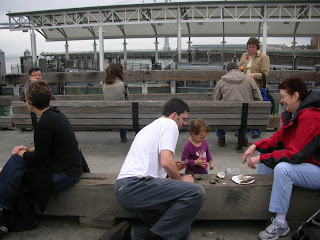 Overwhelmed by all this food, I only bought a kilo of new season organic (although all produce at this market is organic) Pink Lady and Washington apples.

From the market I walked down to Fisherman's Wharf for my one and only tourist food activity - clam chowder from a sourdough bread bowl. The chowder was more potato soup than clam chowder and I think I might have to try making some myself to find out what it is supposed to taste like.

The rest of the afternoon was spent wandering through bookshops (a busmans' holiday this one), including the wonderful Green Apple in the Richmond district where I kept telling myself as I looked through the used cookbooks " you only have a 30 kilo luggage allowance" I did pick up a paperback copy of Claudia Roden's Book of Middle Eastern food and this time I'm keeping it for myself (see earlier blog). I also went into a tiny VERY crowded 2nd hand bookshop on Haight St where the grumpy owner yelled at me when someone nicked one of her $1 books from the table out the front (apparently I didn't tell her about it quickly enough for her to catch him).

Pasta at Little Italy tonight and a cable car back to the hotel.
at 1:00 PM

Oh i love the blog! it makes me very jealous that I'm not there...not long now i spose! Farmer's Markets look awesome. and i loved that diner (the pine crest if i recall correctly?) such happy memories of my first EVER night in SF, but it's the Blue Lighthouse not the Blue Windmill in Sausalito(sounds something like the Moulin Rouge lol)The photo made me miss jono :( well have fun the next few days. Enjoy the "whitest" town in America (as described by our Walnut Creek friends!) xo