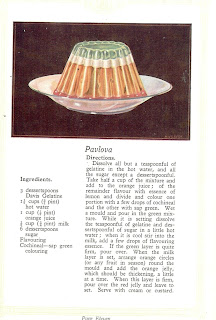 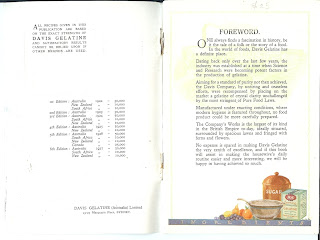 Well it's on again. This morning in The Age and the Sydney Morning Herald hackles were raised on this side of the Tasman by the announcement that the Oxford English Dictionary has proclaimed the Pavlova a New Zealand invention (something the Kiwis have been claiming for decades while the Aussies make equally strident claims for it). Part of their logic for this was apparently the fact that " claimed the dessert was first recorded in New Zealand in 1927 in Davis Dainty Dishes, a publication of the Davis Gelatine Company."
As the SMH's go-to "leading expert on pavlova" (I wonder if that's what it says on her business cards) Dr Helen Leach correctly cautions, the pavlova in the Davis booklet is actually a jelly impostor. Here's a scan of the aforementioned Davis Dainty Dishes from 1927, and as you'll see, it was a publication which oiginated in Sydney but was also published in New Zealand and South Africa at the same time (meaning by the OED's standards South Africa could also claim the Pav). You'll also see that the Pavlova in the cookbook was not, as it is today a light as air meringue confection, but a layered jelly which vaguely resembles a tutu. I don't have an opinion either way about who can claim the Pavlova, but the OED will need to find something else to back up its claim aside from Davis Dainty Dishes (which by the way is a great source of recipes for gross things like Sheep Tongue Shapes:

I have a book..8th edition which is titled DAVIS dainty DISHES. It has been passed down to 3 generations, and I would gladly give it up if some one would like it.