I have had an exciting couple of months on the vintage cookbook scene, which accounts for my silence on the blog front. First I tracked down for a Melbourne institutional library the holy grail for Australian cookbook collectors -The English and Australian Cookery Book: Cookery for the many as well as the Upper Ten Thousand by an Australian Aristologist. published in London in 1864.( You can read about its author Edward Abbott, a Tasmanian politician, in Colin Bannerman's entry for the Australian Dictionary of Biography . Even better read Colin's excellent history of early Australian cookery books A Friend in the Kitchen). Essentially it is a must-have for serious collectors because it is widely accepted as the first Australian cookery book. It is as scarce as... well as scarce as the first Australian cookery book really! When Fedex finally delivered this treasure (at great expense!) from the US I opened up the enormous package to find a small and slightly unprepossessing book, with a couple of nice engravings (particularly the title page which you can see below) and an amusing text on the vagaries of cooking and eating in the colonies (apparently kangaroo makes a good substitute for venison). The library were very happy to have it, and I felt the satisfaction of having managed to find it for them. 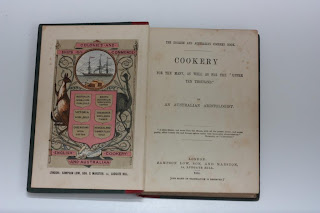 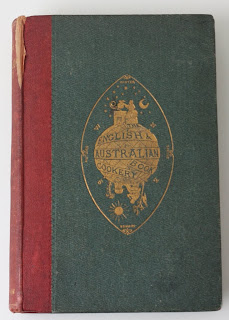 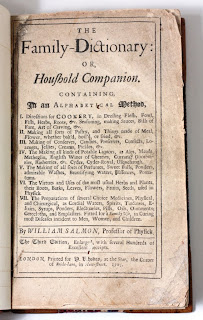 However my next purchases brought home for me the relative youth of Australia's European settlement and culinary scene - I bought a library of books which included 5 English cookery books published 100-150 years before Edward Abbott's, in fact three were published before Edward Abbott was even born in 1805. When you handle these beautiful books (very carefully!) you can literally feel the print on the thick, textured pages. While Edward Abbott's book is amusing in it's tone, in the earliest of these cookbooks the language and cookery terms are almost foreign (and the f for s mesfes with your brain!) In the earliest - a 1705 edition of William Salmon's The Family Dictionary or Household Companion household advice is mixed in with recipes, so a lengthy recipe for Lumber Pye (Take grated bread, cloves and mace finely beaten, beef suet cut fmall into fquare pieces, the veal or capon minced fmall) is followed by a treatment for Lunacy (apparently a bit of Angelica, rhubarb and other herbs boiled in spring water and given hourly while the victim rests in bed with a warm candle does the trick) One day I might try the killer recipe for Gingerbread, but doubt I'll be Fricafing any Neats-feet anytime soon!
Here are some photos of the others and and links to their descriptions on my website. A real treasure-trove.
﻿﻿
﻿﻿

WOW!! What a find. I shudder to think of the cost. My husband is an authority on the 18th-century British periodical and also an excellent cook. I'd be interested in gifting him with an 18th-century cookbook if ever one happens to cross your path.

I have a copy of "The English and Australian Cookery Book" I am from India. i wanna sell it. it is considered the first Australian cookery book and is also kept in the powerhouse museum Sydney. It is a Hard Bound book and i believe it is the only edition ever printed. How can you help me with it.