Preserving the Fruits of our foraging 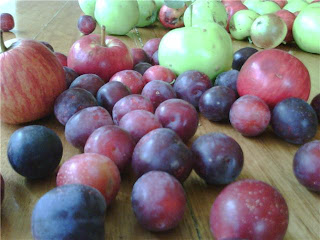 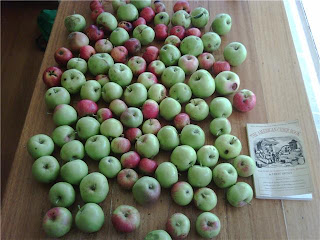 I am a big fan of tv chef and food activist Hugh Fearnley-Whittingstall. FW's food philosophies are close to my heart - eat locally, grow as much as you can for yourself, (including in his case raising and slaughtering animals for meat -I admire the philosophy, but don't really have the opportunity to put it into practice) and, importantly use the resources of nature to supplement your larder. Inspired by an episode of River Cottage in which he produced an entire meal from foraging, last March Jonathan and I drove around the countryside looking for 'wild food' and came home discouraged with a measly bag of rosehips for our troubles. So when I spotted several trees heavy with plums and apples on the way back from a visit to Sue and Peter Lendon of Yarragon Books last week, I rang Jon and arranged for another foraging trip. Turns out we had been out looking (particularly for apples for cider) too late last year and instead late January - February is the best season on the roadsides. This morning it was up at 5 for the one hour drive to Gippsland around the back roads near Warragul. The rules are simple - no trespassing (sorry Jonathan) and no trying anything we can't confidently identify (at first anyway!). First off were two varieties of small plums growing next to each other. As you can see, the fruit was weighing down the branches, and we literally only had to run our hands down the branch to get handfuls of sweet juicy, yellow-fleshed plums, around 9 kg worth from two trees, and it didn;t even look as if we'd been there!
We also spotted a wild red currant growing nearby among the blackberries - tasted ok, but we decided that it was too much effort for too small return. Queen Anne's Lace is flowering all over the countryside at the moment - it's a relative of the carrot and when you pull up a plant the root certainly smells carrot-y! It's a bit late in the season to use the roots - they need to be picked when young and tender, although Mrs Beeton's says that even then the wild form has an acrid, disagreeable taste. It's been known from ancient times as an aperient and abortifacient. Very pretty but not a harvest for today. Also just starting to colour were the berries of the Hawthorn tree - commonly used as a hedgerow plant along country roads. The berries are known as Haws, and , I am reliably informed by the interweb, can be used in jellies, jams and syrups ( although I note that all the recipes I have found so far have equal quantities of apples and sugar, so suspect that these preserves are Haw in name only).
Next the search was on for apples. Jonathan has made cider a couple of times, but wanted to try it with foraged apples (cheaper and more plentiful). We spotted plenty of trees that were about a fortnight off being ready (as well as a nectarine in the same state - damn!). Finally down a side road we stopped under an enormous tree laden with what looked like a variety of golden delicious apples ready for picking (as well as falling on the ground). Because the tree was so tall, and we hadn't thought to bring a rake or long secateurs, there was a bit of hilarious bashing of branches with sticks and trying to catch the falling fruit so it wouldn't get damaged on the road. The thing about apples (and any fruit) growing wild is they have probably grown from a randomly dropped apple or seed decades ago, and bear little resemblance to what we see in the shops. Cider is best made with different varieties, so after picking a couple of kilos from this tree we kept driving until we found a couple more - red apples which looked like Bramleys and red delicious, around 9kg in total. 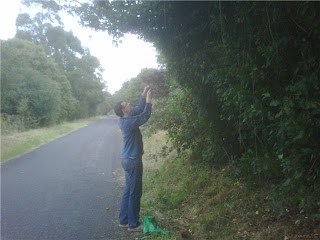 So a very 'fruit'-ful day. Tonight we're going to be cooking up our bootie, and I'll blog the results. I soon stopped feeling self-conscious about our exploits, and got a small thrill every time we had a 'find' either for today or to make note of for future foraging expeditions - of which there will be many! I've made a booking for the three of us to do a mushrooming ramble, which will hopefully equip us with the knowledge not to poison ourselves this coming autumn!
at 12:09 PM