Christmas is behind us and like most of you, my fridge was stuffed with leftovers for a week or so. My Mum is very inventive with ham and purposely buys a bigger ham than she needs when it's her 'turn' for Christmas lunch so that she can make the family standard of ham and potato pie: Thinly slice a couple of potatoes (I add an onion), layer these with ham, seasoning each layer with salt and pepper and a sprinkling of plain flour. Pour over a cup of cream (Mum uses plain milk, but cream gives a richer sauce) dot with butter and bake in a moderate oven until the potatoes are tender.

My favourite leftover is Panettone. It's great as a festive french toast and also makes a couple of delicious desserts. Raspberry and Panettone bread pudding is dead simple. Cut a couple of thick slices of panettone, and cut out several rounds (one per serving) with a large scone cutter. Put each round into a greased ramekin (or as I do you can bake them in a muffin case in a Texas muffin pan). Beat together a cup of milk, 1/2 tsp of vanilla extract, 1 TBS of caster sugar, 2 eggs and a couple of good dollops of creme fraiche. Top each panettone round with fresh or frozen raspberries, sprinkle with brown sugar and then carefully pour the egg mix over, until the milk is just covering the top of the panettone. I bake these in a water bath in a moderate oven until they're puffed, golden brown and firm to touch. Serve with (preferably homemade) vanilla icecream. 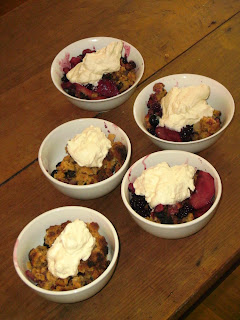 The second panettone dessert was one I created tonight - an apple and blackberry panettone crumble. I stewed 5 sliced Granny Smith apples in a bare amount of water sweetened with a couple of tablespoons of maple syrup. When apples were just tender (I don't like them mushy) I drained them and combined them with 2 cups of frozen blackberries in a casserole dish (The blackberried were foraged from the horse paddocks across the road at the end of last summer - free food!). I topped the fruit with a topping of 2 cupfuls of crumbled panettone, combined with 3 TBS brown sugar, 1/2 cup flour and approx 200gms of melted butter. The mix should be crumbly but moist, don't be afraid to add extra butter if it looks too dry. Sprinkle the mix over the apples and blackberries and bake in a moderate oven until the top is golden brown. You don't need to add any extra water to the fruit as the blackberries will release lots of juice as they cook. I served this tonight with a maple and lime cream - My daughter Hayley has appointed herself official recipe tester and has pronounced this YUM
at 8:05 PM

Your ideas for panettone puddings sound delicious - I think I'll have to but a panettone on purpose at Easter - and I'm mostly a "savoury" person!

Yep I'm looking for an excuse to buy another pannettone, my freezer is groaning with foraged fruit and will make a great accompainment to some pannetone desserts