The last day or two of any holiday usually consist of a mad dash around shops and post offices, packing suitcases and trying to work out the most economical way to get kilos of books back to Australia. This trip was no exception but I also managed to squeeze in a wonderful day trip down to Monterey, to visit the antique shops in the lovely town. 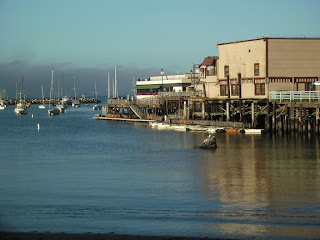 Pacific Grove is home to Holmans,  a former department store which is now and antique market. Mostly it is full of antiques which are not my style - roccoco furniture, lots of glass and stuffed animals. But there is also a lovely basement room full of kitchen antiques. 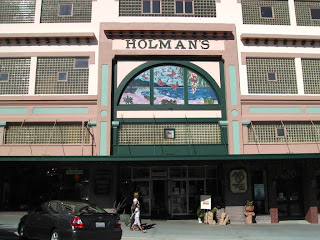 In 2008 I had spotted my first Hoosier cabinet in Holmans -Hoosiers are an early model of the efficiency kitchen, with lots of gadgets and storage for the modern (early 20th century) housewife. 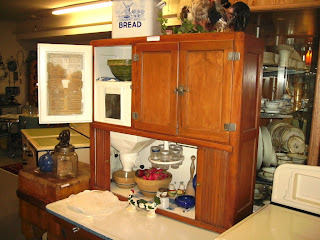 I had sworn that if it was still there this time as it had been on my last 2 trips to Pacific Grove (when I photographed it above), I was going to find a way to ship it back regardless of the cost. Sadly (or perhaps not, it really was a hare-brained scheme) my hoosier cabinet had finally sold. There was though a gorgeous American solid fuel oven which would look amazing in my kitchen. Mmmmm now lets see.... 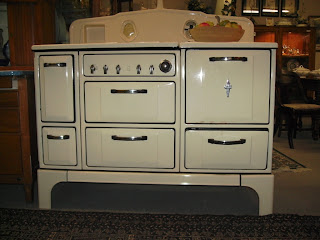 I had a lovely browse through the Cannery Row Antique Mall, which last visit produced some fantastic kitchenalia and came through again this visit with a dozen original seed packets from the 1920s which I'm going to reproduce for my next line of greeting cards.

My visit was a flying one and by dark I was driving back into San Francisco. I parked the car at the hotel and jumped on to the 14L bus down Mission St to visit a restaurant on my list which specialises in Southern cooking. The bus ride was an interesting one. There was a real mix of ethnicities and demographics getting on and off during the 20 minutes trip. After I got off and started to walk to 29th St, I had a brief moment when I wondered if walking in this area at night was the best idea for a woman on her own. However as I have discovered over the last three weeks, 99% of people mind their own business and if you carry yourself confidently and look like you know where you're going, you're generally only accosted by panhandlers asking for change.

The Front Porch  when I reached it was dark (almost too dark - no photos of the food I'm afraid) and cosy. The menu is Southern and the decor kind of hillbilly bar room. I imagine that it would be a popular hangout for the locals with a nice long bar and a good range of drinks, but tonight it was very quiet (it was early - only 6pm) with 2 other tables occupied. Behind the open servery opposite my table, I heard the kitchen staff discussing who'd be sent home if business didn't pick up. The servers were friendly and when I explained that I hadn't tried Southern food before, more than happy to explain what was what. I decided to have 2 starters: shrimp and grits & pork and beans. I really wanted to try collard greens, because it seems like such a quintessential Southern dish, and according to other reviews I had read, their fried chicken is legendary. But one does need to recognise one's limitations!

The grits came first and were unexpected - I had imagined a polenta like base, but got instead a flavourful, almost soupy dish, spicy and a little smoky with four large juicy prawns swimming below the surface and topped with (I think) a few chunks of bacon. I say I think because the darkness of the room came into play here: it is a bit of a truism to say we eat with our eyes, but I definitely felt I didn't get a true sense of the dish because I could barely see it. While it was a good exercise of my tastebuds and sense of smell, I would have much preferred to see the dish as well as taste it.
The pork and beans followed soon after I had started the shrimp and grits, but being served in a small cast iron pan stayed warm while I finished. This dish was less unexpected. A small square of pork belly, the flesh very tender, had a thick layer of fat and sat on top of a pile of aromatic slow-cooked white beans with the sweet and sour flavours of molasses, possibly malt vinegar,brown sugar and more. The beans were studded with small pearl onions (which of course I didn't realise until I bit into one). It was a very filling dish which I could not finish and made me wish I had opted for the collard greens as an accompaniment to the shrimp and grits. Serves were ( as they always are in the States) generous, but not ridiculously large. While the desserts menu looked lovely, it was not tempting after those two dishes.

After finishing my meal I stepped out into the balmy night and decided to walk off my meal, wandering a couple of miles down the bright and chaotic Mission Street. Through the windows of Mission Pie, which I had visited a week earlier, I saw a classical quartet accompanying customers' coffee and pie. A block further down Mr Pollo was closed and inside El Farolito a mariachi band was playing ( they have followed me everywhere!). Some of the enormous shops selling everything from luggage to t-shirts and tortilla presses (I picked one up as a gift) were shutting up and on one street corner a shirtless man was sitting in the gutter with his hands cuffed behind him, surrounded by police officers. I took my last bus ride to Powell St, hopped on my last cable car to take me up the hill, sat on my hotel balcony for the last time and thought of all the places I hadn't got around to visiting, mentally planning the next trip. Goodbye San Francisco, until next time.
at 4:08 PM