Adventures in the Mission

I'm fairly sure it was intentional, but the soundtrack of the movie The Mission was playing as I queued up at Arizmendi Bakery this morning. Arizmendi is a good example of the ethical food movement in San Francisco, and was the first accidental discovery on my eating/book tour of the city's Mission district. The Mission is named for the Mission Dolores, San Francisco's oldest building, & perhaps most famous for its appearance in Alfred Hitchcock's Vertigo. It is predominantly Hispanic, but in recent years has begun to see an influx of uber-trendy boutiques, gift stores & ethical foodie destinations like Arizmendi. I was on a wander along Valencia St when the smell of roasted garlic assailed me. The next smell was coffee and that was the clincher. And surprise surprise it was REALLY good coffee. I was tempted by the smells from the pizza oven, but given my mission (ahem) was the food of Mexico I resisted and instead had a latte and a ginger shortbread biscuit. Arizmendi is a worker-owned cooperative bakery, along the lines of the Cheeseboard Bakery in Berkeley (and as I discovered later, was actually initiated by the Cheeseboard co-op in 2000).

My next destination was Mission Pie, not-for-profit whose cafe and bakery not only provide pies and baked goods produced from local sustainable sources, but also provide employment for local youth. Like Arizmendi, the focus at Mission Pie is as much about being good citizens as it is about producing good food, but the food there was good too. I bought a small pie for tonight's dinner (although given the eating schedule today, I think it might end up being tomorrow's dinner).

As I wandered the streets of the Mission, I was struck by the stark contrast between the busy, dirty and in many cases derelict main thoroughfare of Mission St itself and the surrounding streets which were quiet, clean and charming - it was like some variation of the Cone of Silence kept it contained. There was a whole block of Mission St which must have been the entertainment block with 4 former movie theatres now completely unused (except as a discount store in one case) They were very sad shadows of their former glorious selves. 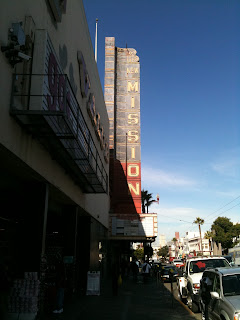 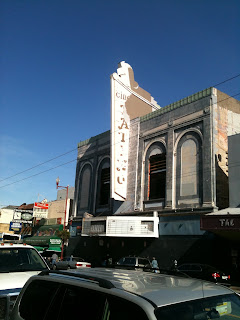 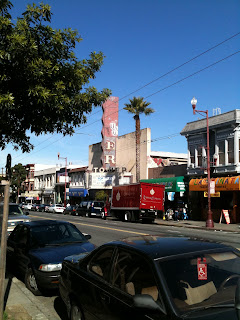 I headed past a couple of Colombian and Ecuadorian restaurants, providing variety amongst all the Taquerias. One of them is Mr Pollo, which has had some really good reviews, and might be worth a visit another time. It's publicity is obviously working as there was a bit of a queue outside, mostly of trendy young things.

There were some gorgeous gift shops, a herbalist, a shop called "Her Majesty's Secret beekeeper" dealing exclusively in honey and beeswax products, and I didn't even get to 18th street and BiRite Grocery and Icecreamery.

OK so now its lunch time- I had asked the lovely Samantha in Omnivore Books for a recommendation on where to eat good Mexican food. She suggested either El Farolito (which she said was a gringo take on the cuisine) or Papolote for genuine fare. I decided on authentic fare at Papolote and headed off to find it.

I walked straight past it the first time. Its a small hole in the wall with no name in the door. The food may not be gringo, but the place was full of them, probably because the previous night it had been on a tv show hosted by celebrity chef Bobby Flay. Seeing the burritos come out and that they were, like most burritos in the States, HUGE, I order instead the Chili Verde pork tacos and a watermelon aqua fresca. As is also the case with most taquerias, a bowl of corn chips is served while you wait - this time with Papolote's spicy house salsa. The filling is delicious, but I end up eating it with a fork because the tortillas fall apart when I try to pick them up.

I finished the day with some bookshops - the Mission is full of them. Mostly they stock indie, art and literature, so I wasn't really looking for cookbooks (but found some anyway!) This, I keep thinking, is why San Francisco is my kind of town. Not just great food, but conscious, ethical food (although there's lots of the other sort, I just don't eat there) not just bookshops, but a culture and an ethos that allows these bookshops to remain open, indeed thrive.
at 5:26 PM

Whoops! It's the opposite (Papalote being the gringo option)...But I'm glad you enjoyed it nonetheless!!

What a fabulous time you are having! Enjoying reading along with you.

Aaah that explains it then thanks Sam - I'll go back before I leave and try El Farolito.