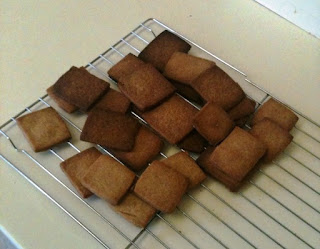 
As I've blogged before, I tend to bake on a Sunday morning to fill up the biscuit tin for the week ahead. Since three of my children left home I have been doing it less often. This morning however I wanted to do something with the lump of ricotta left over from my first pasta-making foray last week. I remembered seeing a Ricotta Cake on my favourite tv show Top Chef a couple of seasons back so headed to the internet to track down a recipe. I have been using the Epicurious app on my iphone but they only had ricotta cheesecake recipes. Eventually I found a recipe on a great blog called Creative Loafing. It was a quick and easy recipe and when it went into the Aga I decided to make some biscuits by turning to the other end of the spectrum - my 80 year old copy of Miss Drake's Cookery Book. I've been cooking from it a lot lately: I've been invited to talk at several local libraries and like to bring along something baked from the old cookbooks. Miss Drake's has been a treasure trove of interesting recipes; of things we never bake any more (like "Bubble Bread" which it turns out is a Salada-like cracker ) and dishes which now go by different names: like Cairo Dainties, a lightly spiced biscuit which it turns out tastes like, and has the texture of, a Dutch Speculaas. So at one stage I had propped up on my bench, a 1927 cookbook and a 3rd generation Iphone showing a page from a blog, and it struck me that there will always be a place for both old and new tech - paticularly since a recipe on a page is so much easier to read than a little touch screen which ends up covered in slightly greasy fingerprints because I have to scroll up and down!! 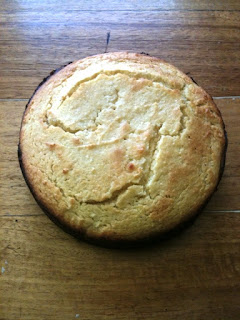 Lemon Ricotta Cake - the black around the edge is the bottom of the springform pan (not the Aga's temperamentality!)