Last time I posted I wrote about the Aga being moved into place in my kitchen. The Agaman made a time to come back in ten days to do the conversion, and in the interim I spent almost every spare moment cleaning, repairing and repainting. Carly said that every time she rang I seemed to be doing something with the Aga, and indeed we had one long conversation during which (with the phone wedged under my chin) I gave the top and sides their second coat of paint! Pics below are all before shots, I'm holding back on afters until all the work is done on the surrounds so you can see it in all its glory! 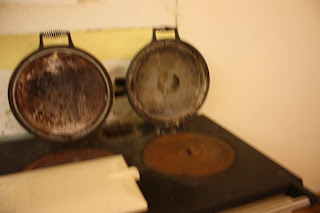 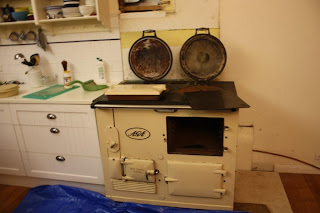 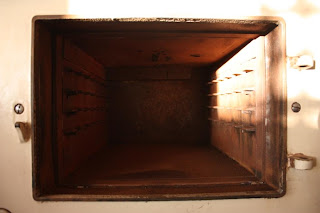 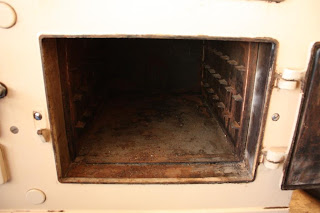 First job was to clean - using lots of very hot water and a bit of Gumption on the baked on food. A bigger job was derusting the ovens - despite my apprehension when it arrived, the Aga is actually very sound, and in fact was only showing the kind of oxidisation you would expect after being outside for a year. After I spent a few hours with a steel brush, David discovered that a wire brush attachment on a drill does a really thorough job, (but makes a BIG mess of the kitchen). Both ovens were then oiled with vegetable oil and looked, if not new, at least 100% better than before. Next we had to attend to the top: what we thought was rust was in fact years of baked-on food and flaking paint, and was removed with LOTS of elbow grease. The sides of the oven did have rust patches ( as you can see in last post's photos) which we treated with a neutraliser and then painted with a gloss enamel. We also repainted the top with a couple of coats of the old-style pot belly paint and then at John's advice I rubbed it over with a little Vaseline - apparently it's what all the 'old birds' used to use.
All this was completed just in time for John's arrival last Friday to install a flue and the gas conversion kit as well as replacing some of the parts which were beyond redemption.
at 9:45 PM