Joining the Aga cult episode 3: OMG that's what the wall looks like behind there, and learning to love my microwave. 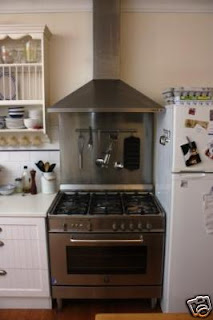 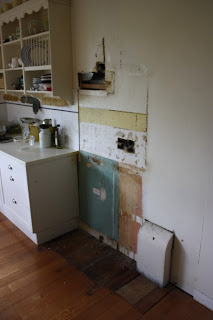 The sAga continues: On Tuesday my favourite plumber - Dee's son Tom who is a 2nd year apprentice, arrives at very short notice and does an excellent job - disconnected my oven. On Saturday it was picked up by its new owner and, because the Aga man is unable to transport the Aga until the 24th June I'm learning to love cooking with appliances and in the microwave. So far I have learned that the rice cooker is very versatile. I have cooked risotto in it as well as polenta (not using the rice cooker method, but just as a heat source). Have a look at this article in the New York Times about how apartment dwellers in New York use the rice cooker to expand the functions of their small kitchens. I read it last year and made a note to try a few of the suggestions, which I'll now do out of neccesity. I've also pulled out an old slow cooker I found in an opshop a couple of years ago and a 35 year-old Sunbeam electric frypan I purloined from my mother when she tried to throw it out a few years ago. This has so far cooked a beautiful veal osso bucco, acted as wok, fried bacon and this morning I made pancakes in it from waffle batter when my 40 year-old waffle maker gave up the ghost. (hey it's a vintage kitchen - what did you expect, a Thermomix?).
I did a surprisingly nice dish of baked fennel with atlantic salmon in the microwave. Because I am not a microwave fan and only ever use it for porridge, melting butter and steaming vegetables, I had to take a stab at how long and what power ( 5 minutes on High). I was pleasantly surprised - the fish was perfectly cooked and the fennel was still slightly crunchy and its flavours steamed through the fish.
Today (Sunday) David is pulling the BBQ into the enclosed verandah outside the kitchen door so I'll be able to use its wok burner and hopefully bake some things with the hood closed (Postscript "here's one I prepared earlier" - turns out you can bake in the BBQ - some adjustment is needed to get the timing and heating right, and the results are not very pretty but noone complained about the taste of this apple and blackberry tart!) 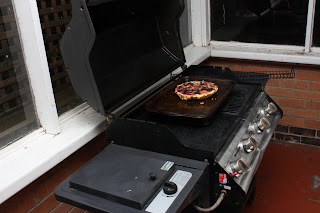 Oh and a decision has been made to bite the bullet and go gas. As it turns out my Aga no longer has any flue left so it seemed pointless to pay money for a brand new flue if sometime in the near future we were going to convert to gas anyway. I feel like I'm chickening out and not going for the Extreme sport version of Aga cooking, but sometimes practicality (and sanity) prevails!! More soon
at 11:25 AM