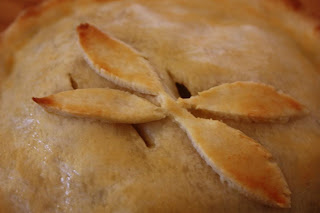 7am last saturday morning, another trip to Queen Vic market and another (relatively) uncommon protein to be explored. While I was tempted to buy goat again, Jonathan (my son) and I have agreed that every time we go to a market we're going to try something different. I'm not looking forward to the day we've worked our way through kangaroo, buffalo, camel, quails and pheasants and have to start trying what the Americans euphemistically term 'Variety Meats'. Although my mother is a master of cooking offal, I never took to brains and kidneys, tripe and sweetmeats - pressed tongue is all the offal I can take.
I bought a farmed rabbit from one of the poultry stores ($11 each). I discarded my plan to make the classic French lapin a la moutarde/rabbit in mustard sauce because our rabbit seemed on the skinny side. Instead it was agreed that a rabbit pie was in order. I found a recipe in Stephanie Alexander's Cook's Companion, which was handed down to her from her mum Mary Burchett. Mary is well-known for her charming 1960 cookbook 'Through my Kitchen Door', which Stephanie later re-issued as 'Recipes my Mother Gave me' (although the Rabbit Pie, I discovered later, is not in the book).
After simmering the rabbit as instructed for 1-2 hours (surely a very wide time window!), I stripped the meat off the bones of what was by now a very gruesome-looking carcass. The meat was combined with sauteed mushrooms, bacon pieces, toasted flaked almonds, parsley and (not too much) white sauce made with the reserved cooking liquid. Because I still had to make a fish pie for the non-meat eaters in the family I cheated on the pastry and used frozen shortcrust (Maggie Beer's sour cream pastry would be great for this). The end result was worth the effort and a gentle introduction to something new: particularly for my (live) rabbit-loving 19 yo daughter Pippa. Stephanie's recipe also uses the rabbit kidney and livers, which are sauteed with the mushrooms and bacon. Rather than making one large pie with a lattice top as Stephanie suggests, I made individual pies and of course no blind-baking for me all straight into the oven. 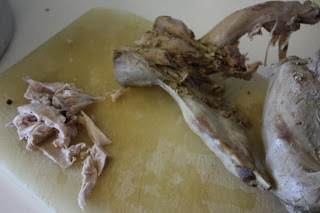 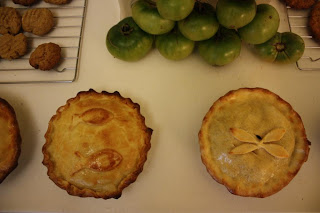 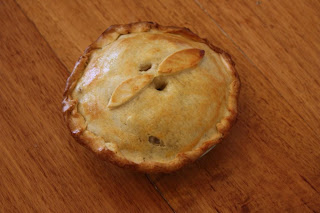