I've been thinking of starting a blog ever since I opened my shopfront in February 2008. Every day new and interesting people and books come through my door and I think to myself, 'you know I should write that down!' What finally inspired me to start was the discovery yesterday of a couple of little gems at a newly discovered bookshop.

Every couple of weeks I go book-hunting: trawling through bookshops, op-shops and second-hand shops, attending auctions. It's one of the best parts of my job. Usually I cover a certain area of Melbourne, or spend a couple of days in the country. Well yesterday I took a wrong turn, saw the magic words "second-hand books", found a park and walked into an Aladdin's Cave: thousands of books on the shelves and amongst them some real gems.

So here they are: the first is Miss Drake's Everylady's Cookery Book, 2nd edition 1926, in very sad condition I know, but don't you just love that odd cover - who draws a toddler with a very large, very sharp knife? 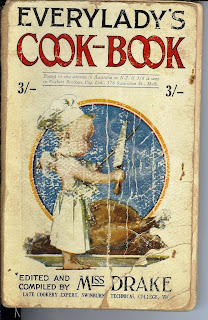 In the early part of the 20th century there was a small army of 'cookery instructors' (always Miss's) in Australia's major cities, training young ladies to become proficient cooks. Many, like Lucy Drake, were trained in England and many, like Miss Drake, produced cookery books for the general public. Lucy Drake, a graduate of the National Training School of Cookery in London, was for many years Head of Cookery at Swinburne Technical College, Melbourne. This book, was commissioned by the women's magazine "Everylady's Journal", in the early 1920s. 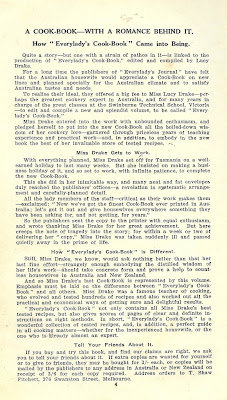 I had often seen Miss Drake refered to as "Late Cookery Expert, Swinburne Technical College" and presumed the 'late' meant she had retired from teaching. This book however revealed a very sad story: a long note from the publisher headed "A cook-book with a romance behind it" (in this case romance not being what we think of today) tells of how Miss Drake diligently completed her cookery book while on holiday in Tasmania, but within a week or two of delivering her copy, "was suddenly taken ill and passed quietly away in the prime of her life." Her recipes and words of wisdom live on:

For a great bio on Miss Drake, check out Christopher Akehurst's excellent article which you can find at: http://www.encyclopedia.com/doc/1G1-95445829.html

Gem no 2 is simple: a 1966 menu from The Caravan Coffee Shop and Dining Room at the Oasis Hotel in Cache Creek, British Columbia. I have quite a few menus in stock, lovely gilt productions from famous restaurants, Qantas menus with Pro Hart reproductions, menus from the great ocean liners, but this simple menu is so evocative of a time and place I couldn't resist it: 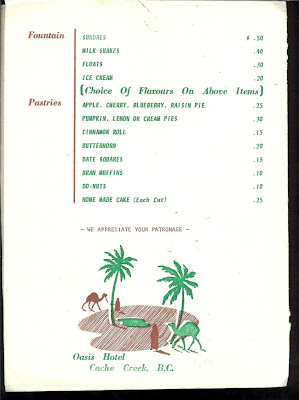 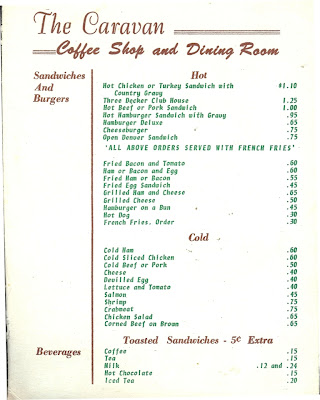 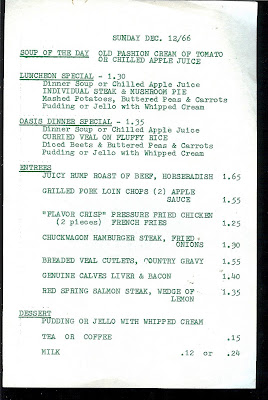 I have been trying to find a copy of Miss Drake's book. My grandmother bought a copy when she married in 1935 because she didn't know how to cook anything for my grandfather. She used it for many years until it fell apart.