Food writer John Lethlean's column in 'The Age' (Melbourne's broadsheet) yesterday (07/06) was enough to make my eyes water. He had, he wrote, recently acquired several hundred kilograms of collectable quality cookbooks from a generous reader. Lethlean acquired some real classics (all of which I have or have had on the shelves at various times): Elizabeth David's English Bread & Yeast Cookery; Nico Ladenis's My Gastronomy; Richard Olney's Simple French Food - thus my cookbook envy. I have visions of some of the other classics there must be in the collection and am quietly green!


These two series are both very collectible and The Good Cook series in particular has become something of a bible for professional and skilled home cooks alike. What set both series apart was that they were written, compiled, edited or in some way contributed to by some of the most famous food writers of the 20th century: among them MFK Fisher, Richard Olney, Jane Grigson, Waverley Root, Adrian Bailey, Michael Field, Craig Claiborne, James Beard, Margaret Costa, Jacques Pepin - a veritable who's who. For those who are interested, I've included a link here to a list of the complete series of each. (You can also search our stock of Time-Life cookbooks via our webpage www.vintagecookbooks.com.au to see what we have available) You'll see that in the American edition 'The Good Cook' series has some different names and additional titles (including the obvious - Cookies instead of Biscuits - but also the peculiar 'Variety Meats' instead of 'Offal'). I can highly recommend The Good Cook to anyone who hasn't yet encountered it - its clear, detailed step-by-step photographs, explanation of methods and ingredients make it a must-have but one of the real beauties of the series is that each volume contains 200 plus recipes culled from cookbooks both ancient and modern.

Here for example is a page on making a layered terrine from the excellent volume Terrines, Pates and Galantines: 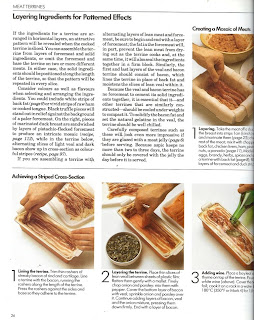 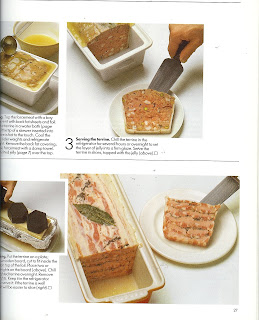 QUINCE TIME!
In the Southern Hemisphere, it's Autumn and time for Quinces - that bulbous, ugly and ancient fruit with the heavenly, heady but delicate smell. They are inedible raw but turn the most beautiful pink when cooked, usually in jellies and pastes. According to Mrs Beeton "the ancients preserved the fruit by placing it, with its branches and leaves in a vessel filled with honey or sweet wine" but warns that "this fruit has the remarkable peculiarity of exhaling an agreeable odour, taken singly; but when in any quantity, or when they are stowed away in a drawer or close room, the pleasant aroma becomes an intolerable stench."
Here are two recipes, one for a very easy quince jelly taken from the classic CWA Esk Valley cookbook (my personal favourite) which has the advantage of leaving you with delicious quinces to eat, and also doesn't involve chopping and straining:
EASY QUINCE JELLY
(adapted from the CWA Esk Valley Cookbook, 1966)
8 large quinces
8 pints (5l) water
4 1/2lb (2kg) sugar
Juice of 2 lemons


Thoroughly rub fluff from quinces. Place whole quinces into large saucepan with water, sugar and lemon juice. Boil together for 4 hours, removing any scum occasionally. When small bubbles cover the surface, drop a teaspoon of the liquid onto a cold plate (from the fridge). If the liquid sets to jelly on the plate, turn hotplate off. Remove whole quinces from jelly and set aside. Pour jelly into hot, sterilised screw-top jars and seal immediately. The leftover whole quinces are delicious hot with cream, ice-cream or custard, or slice them into a dish and top with a simple crumble mixture and bake. You can also chop the flesh finely and serve it heated over ice-cream.
The second is for a Quince Paste recipe taken from the 1939 Woman's Tested Recipes, a cookbook issued by a magazine called "Woman's". It's a fascinating glimpse into our past with each recipe accredited to a reader - often with their full address appended.
QUINCE PASTE
(from Woman's Tested Recipes, 1939)
Ingredients - 2 pounds quinces, 2 pounds sugar
Method. - Clean quinces with a soft cloth, cut in slices and boil in water until soft. Press through a fine sieve, add sugar and boil together stirring constantly until thick. Care must be taken to prevent it from burning. When cooked, turn on to a china dish and leave to cool, then cut into little figures or letters with a knife. Roll in sugar and put away to dry. Will keep for weeks.
- Miss Nanette Kuehn, 242 Pitt St, Sydney.
Miss Kuehn's recipe is typical of many in these old cookbooks, they presume a lot and don't give very detailed instructions! I've tried the above and adapted it somewhat!
1kg quinces, peeled, cored and chopped. Boil in a minimum of water (around 11/2 cups) and the juice of 1 lemon until soft - around 30 minutes. Allow to cool and push through a sieve or liquidise in a food processor. Measure the pulp and add 1 cup of sugar to each cup of pulp. Return to saucepan, cook over medium heat, stirring regularly until the paste becomes rosy pink and stiff ( this can take 3-4 hours). Pour into a greased lamington tray and dry in a warm place.
at 11:20 AM