27 years ago, when we first moved up to 'The Hills', having a chestnut tree in your backyard was like money in the bank. For a couple of years the proceeds of chestnut sales to an inner-city Italian grocer and at a roadside stall even paid our council rates. You can still see groves of chestnut trees all over the Dandenong Ranges, and around ANZAC Day convoys of cars still come up to to forage for them, but the advent of huge orchards in North-Eastern Victoria as well as cheap imports eventually drove the price of chestnuts down to a point where the return was outstripped by the tedious (and painful) harvesting. I was never a huge fan of the nut, we made chestnut soup a few times and David likes to roast them and eat them. 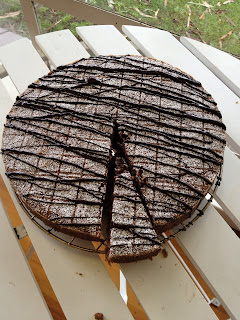 This week I was tempted to revisit chestnuts by a recipe in this week's Epicure for Torta di Castagna e Cioccolato (Chocolate and Chestnut Torte) from the River Cafe Cookbook . Having bought 1 kilo of chestnuts from a roadside stall in Olinda ($10 - not much more than they were 27 years ago) I set  aside a morning to prepare them, and just as well as I had forgotten what a tedious task it is. Following Stephanie's advice in The Cook's Companion I first slit a cross in the chestnuts and then boiled them for 15 minutes. After this I spent an hour peeling off  the outer and inner skins ( periodically replacing the pot back on the heat since as the chestnut cools the inner skin clings on to the nut), ending up with split thumbnails and very sore fingers and around 600gm of meat.

Thankfully the cake itself was easy to prepare. The recipe called for the chestnuts, chocolate and almonds to be coarsely chopped in the food processor which made the resulting cake textured and chunky, with pieces of chocolate through it rather than an overall chocolateyness. The resulting torte was very moist, took about 15 minutes longer to cook at 150 than the recipe indicated and had a complex, nutty flavour to it. The article accompanying the recipe said that the lemon zest was the key, but I felt that it rather dominated the end product. Probably not one that I would rush back to making, but it made a nice addition to the Mother's Day repast. 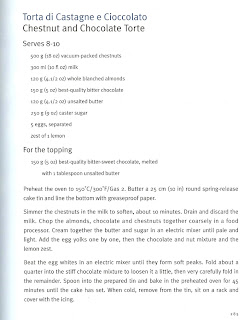 I love your blog! Im planning on coming up to Kallista tomorrow for a look in your shop, followed by maybe afternoon tea at the Kallista Tea Rooms! This recipe looks so good! Ive got chestnuts so now I know what to do with them! Thankyou! If you have a moment, feel free to read my blog! Thanks again!

I saw your blog and thought it had great recipes and awesome pictures! I therefore would like to invite you to our new culinary website which has just started.

This is how it works in short. TastyQuery.com is a website for food bloggers and their fans allowing them to automatically collect recipes from your food blog. It's a large database of links to recipes on food blogs. Everyone can join us for free.

In case of any questions, don't hesitate to contact us.


It is really interesting, I hope everybody lick this Post.

It's a fact that your blog posts are so unique and interesting and I enjoys a lot while reading your posts because you explained your post very deeply in a very easy and clear language. Thanks for your support and Happy Blogging :D

It's a fact that your blog posts are so unique and interesting and I enjoys a lot while reading your posts because you explained your post very deeply in a very easy and clear language. Thanks for your support and Happy Blogging :D