I have written elsewhere about my enthusiasm for Gary Cooper's gorgeous Yarra Valley wine country restaurant, Bella Vedere. When I discovered on my last visit that Gary runs cooking classes from the restaurant I demanded one as a combined Christmas gift from my family. They obliged and on Thursday I was able to de-stress from the previous two days baking and cake decorating efforts with a wonderful morning cooking and then eating the results. 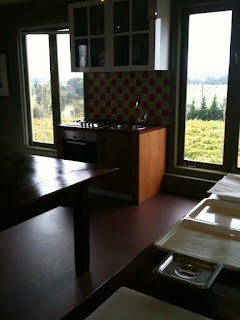 It was a small hands-on class, in which rather than going step-by-step through basic recipes, we worked with Gary to prepare some dishes for lunch-time service. Bella has a purpose-built room on the first floor beautifully laid out with gas burners and sinks around the edge and two huge wooden tables in the middle for prep. We started with something I often have difficulty with - a tarte tatin, in this case a rhubarb version. Whenever I have attempted caramel in the past, the sugar always lumps or burns, and it was really instructive to watch as Gary heated up a large copper frying pan, covered the base with castor sugar and gently swirled the pan over the heat until it started to melt and then turned a beautiful golden and then going to brown. He then added a vanilla bean and two large bunches of rhubarb, which we had washed and chopped into lengths (without de-stringing, which apparently is what causes rhubarb to turn into pulp - who knew!?). This was topped with a sweetened croissant dough and taken downstairs to the bakehouse to cook. 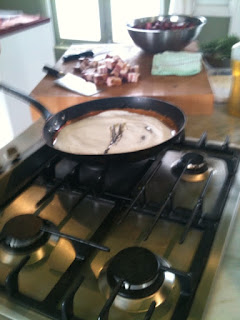 The next dish was a Bella perennial favourite: locally-farmed rabbit braised with pancetta and cooked for around 45 minutes with apple cider, shallots, garlic, rosemary, seeded mustard and (lots) of cream. 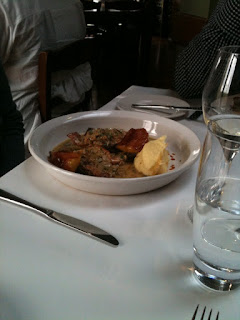 We also prepared a free-form lasagne with a filling of smoked eel, mustard fruits and bechamel sauce, and I was gratified to see that even in a professional restaurant wonton wrappers are an acceptable substitute for fresh pasta.
The final dish prepared was ravioli stuffed with roasted pumpkin, feta and amaretti biscuits. While the pasta dough had been prepared beforehand, we rolled out the dough and made the tortellini, forcing me to finally face up to one of my cooking fears - the pasta machine. I was given one for a birthday present about 15 years ago and have always been too scared to use it - and for good reason I discovered today - it's not as easy as chefs make it look and people like me who are more than a little uncoordinated can have problems getting their heads around the process. After a few stuff-ups (patiently rectified by Gary) the tortellini was finally done. We then spent a pleasant half hour in the picturesque kitchen garden, created by a Kallisa local Jenny Hoogland, who also runs the kitchen garden at the local primary school. After a relaxed couple of hours wining and dining on the fruits of our labour, I meandered my way back to the hills, thinking once again how fortunate I am to live where I do. 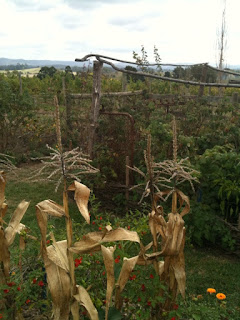