Christmas Pudding with eggnog icecream - the boys do dessert

I was very proud of my son on Christmas Day. I am generally proud of him for all sorts of reasons: he is smart, funny, resourceful and fiercely independent. He recently started his first full-time job and fulfilled a long-held dream by moving into a small flat in inner Melbourne. Jonathan loves the lifestyle, being a 5 minute bike ride from work and able to walk into the city, go the markets and just wander around the old industrial areas taking photos. As I said in an earlier post, he has taken to cooking like a duck to water, and has been quite adventurous - no meat and three veg for him. As is his nature, when he decides to cook he takes a scientific approach (he's read Harold McGee's On Food and Cooking from cover to cover) following the recipe and preparing carefully for his dishes.
So when he told me three weeks ago that he thought he'd like to make the Christmas pudding for Christmas lunch, I knew he would take the same approach and was reasonably confident he could pull it off. We had a few brief discussions about methods and ingredients, but he did it all on his own. After much research, he found a recipe he liked on the internet and went on a big (and expensive) shopping trip to gather his ingredients. He set aside one of his days off and was up until 3 in the morning while it boiled the required 3 hours. Then he put it aside for three weeks. On Christmas day we lit it with brandy (briefly setting fire to our hands!) and served it with all the trimmings. I have an aversion to dried fruit, so don't normally eat Christmas pudding but had to sample it, and can happily report that it was a triumph, rich and fragrant, dense but moist. My mum told him it would make his great-grandmother proud - she was the pudding maker in the family. It certainly made me very proud - of a unique and gifted 22 year-old. 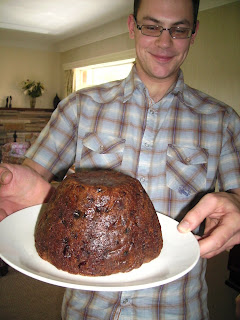 PS: Special mention here to my daughter's boyfriend Ryan who loves to cook and is an excellent baker. Ryan has a love-hate relationship with my Krups ice-cream maker. On the Wednesday before Christmas he spent many hours (and went through about 18 eggs!) perfecting the mix for an eggnog icecream which was the perfect accompaniment to Jonathan's Christmas pudding. As Ryan discovered, when making custard for icecream it is always really important to follow the recipe exactly and not overcook the custard! One false move and the icecream is a disaster - grainy and heavy. Here's the recipe:
Eggnog Icecream
(Serves 10)

Combine cream, milk, vanilla pod and seeds in a heavy-based saucepan. Bring to a gentle simmer over medium heat, then remove from heat, cover and set aside for 15 minutes.
In an electric mixer, beat egg yolks and caster sugar in a large bowl for 2-3 minutes or until mixture is thick and creamy. Gradually beat in the milk mixture. Return the custard to the same cleaned pan with the ground nutmeg. Cook over medium-low heat, stirring constantly with a wooden spoon, for ten minutes or until mixture is thick enough to coat the back of a wooden spoon. It is very important not to allow the mixture to boil or it will curdle. Stir in the whiskey and strain through a fine sieve into a large bowl. Once the custard is cold process it according to the icecream maker’s instructions. Depending on the size of the ice cream maker, you may need to divide the custard into to two – mine only makes a litre at a time. Alternatively depending on how many people you have for lunch, you could divide the above recipe in half – if it’s only one of several accompaniments, you only need a spoonful .
at 2:21 PM

This is a lovely story - my special congratulations to your son. A couple of years ago I invited my teenage sons and nephew to take charge of our whole Christmas lunch menu and cooking - which they did, and it was a great success - however they did nothing so brave as a traditional pudding!