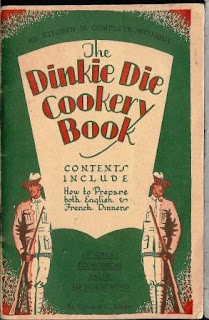 Today is Anzac Day in Australia - originally a commemoration of the WWI battle at Gallipoli in which thousands of Australian and New Zealand troops died (ANZAC stands for Australia and New Zealand Army Corps). The day has become an important day of remembrance in Australia for the casualties of all wars.

What's the connection with food and cooking you may ask? Well aside from the obvious Anzac biscuits (or cookies to American readers - I've included a recipe for you below) there were also several cookbooks put out by returned soldiers and returned and disabled soldiers groups, particularly after World War I. While some of these cookbooks (like the Dinky-Die Cookbook above) appear simply to capitalise on the patriotic images of the Anzacs, others were published by soldiers themselves, or soldier's association . 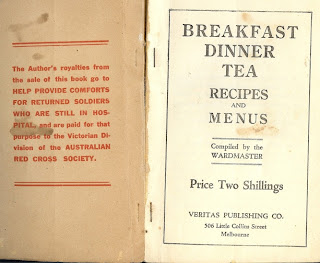 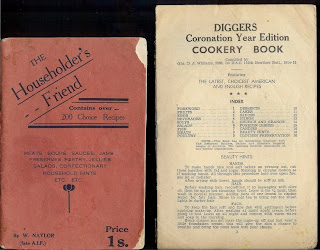 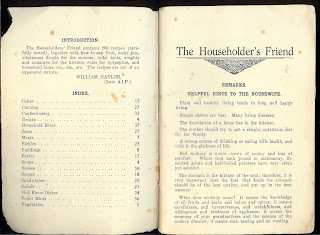 These books were often amateurish and cheaply produced, by men with no apparent qualification in the domestic arts (possibly helped out by wives or mothers). They were often sold door-to-door. In some cases proceeds went to a central organisation, in others to individuals. The recipes are usually wide-ranging: the Coronation Year Cookery book, for example, includes several American recipes and a 'Mexican Tamale Pie'. Some are very simple (Pan-broiled-steak calls for Steak, 1 - 1 1/2 inches thick, butter, salt & pepper) but others quite complex like a recipe for Black Walnut Molasses Taffy. Some offer household hints: "The uses of salt"; "How to clean a velour hat", "Uses for old felt hats". What I find really fascinating about these little books however is not so much their contents as the juxtaposition between the traditional masculine image of a soldier and the domestic, and feminine, pursuits of cooking and household hints - one soldier even offers beauty hints (see photo below). Clearly there was a market for such books and they provided a way to legitimately earn some money. They generally include the author's rank and his regiment, so there was obviously no sense of shame in their production. Unlike their modern cousins, cookbooks like these provide insight into our past, their role in helping us understand our social history is possibly more important than their role in providing recipes.

Preheat oven to 160 degrees. Combine all dry ingredients in a bowl. Mix bicarb soda with boiling water. Melt butter and golden syrup together (I do it in the microwave). Add bicarb mix to golden syrup/butter mix and add immediately to dry ingredients. Mix to a moist but firm consistency. Drop teaspoonfuls on a tray (they spread quite a lot so leave enough room). Bake until golden brown (around 12-15 mins). Cool for a few minutes before placing on a wire cooling tray.
I usually do a test bake of one biscuit when starting to check the consistency of the mix. The proportions above make a firm sl chewy biscuit. If you want a thinner crisper biscuit just add an extra tsp of boiling water and they’ll spread out more
at 10:45 AM

I enjoy your blog very much, as I collect old cookbooks, too. Yours are interesting to me because they represent the history of another country. Please visit my blog, I do an Old Cookbook Review every Friday.

¡¡Hi¡¡ MY NAME IS CARLOS, I AM FROM MEXICO, I WAS OF VISIT IN YOUR BLOG IT(HE,SHE) CONTAINS GOOD INFORMATION I HOPE THAT YOU SPEND(PASS) IT TO YOURSELF WELL..

I INVITE YOU TO THAT YOU VISIT MY BLOG:)
http: //galaxiajuvenil.blogspot.com