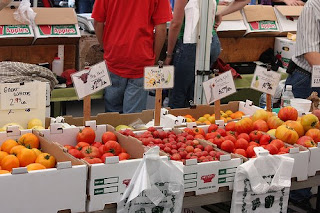 I wanted to share with you a couple of the photos posted to Flickr by my son who is in the US on exchange. Jonathan visited the amazing farmers' market held every Tuesday and Saturday at the San Francisco Ferry Terminal. Although farmer's markets are increasingly popular in Australia, our much smaller population means that we have nowhere near the number or the variety of produce seen in the US versions. Have a look for instance at the stall selling only heirloom tomatoes.


And then there are the beautiful artichokes: 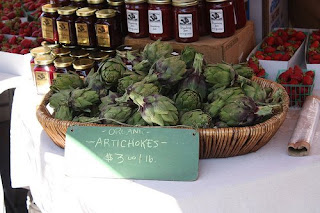 Jonathan spent much more time on a navy ship stationed at Fisherman's Wharf than at the market, but when I visit in November I know where I'll be spending all my time - and taking all my photos!

I often think it's perverse that a nation which can sustain such beautiful and varied food at wonderful farmer's markets can also produce some of the worst food.
The first time I travelled to the US I came back craving decent pasta, salads and unsweetened breakfast cereal. Out of ignorance we did all our shopping at supermarkets where the fruit and vegetable sections pale in comparison to ours (or did, Woolworths/Safeway is definitely following the US supermarket model of limited range and lots of packaging), but every trip I've learned a little more and I look forward to spending lots of time in farmer's markets and trying the diverse ethnic cuisines which can be sampled in the melting pot of SFO.
at 12:48 PM